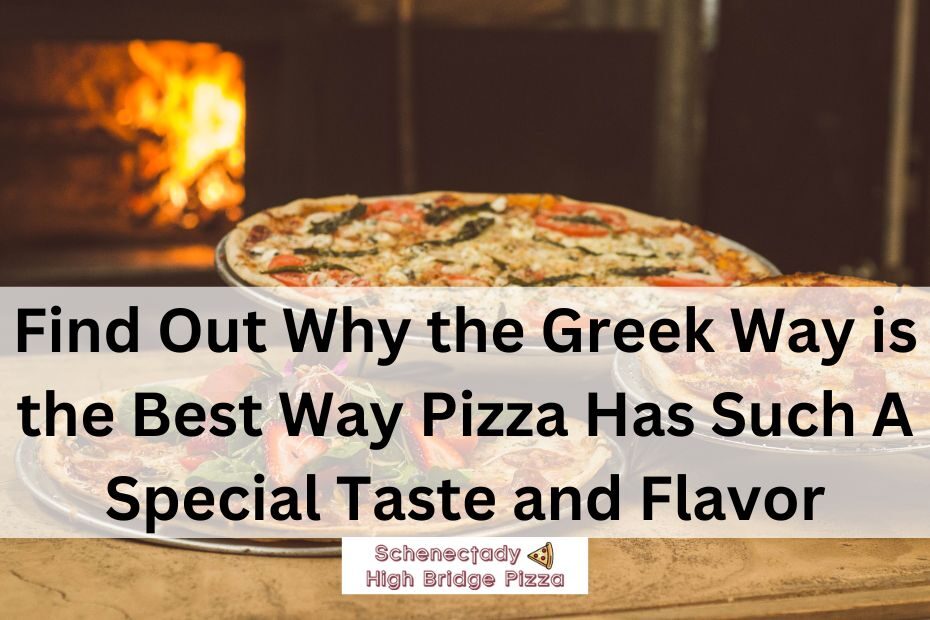 If pizza is your guilty pleasure, you should definitely give a Greek-style pie a go. Although this is not often served on the island, their special twist makes for a delicious pizza that you must taste.

The majority of early 20th-century Greek eateries in America aimed for full-service rather than fast food status, which is why they served gyros and other traditional fare instead of pizza.

These long-standing eateries recognised the growing international demand for pizza and adapted the dish to their Greek roots. It has quickly become a favourite among pizza fans everywhere.

EXPLAIN THE MEANING OF THE TERM “GREEK PIZZA”

Greek pizza is a kind that differs not in its components but in its preparation and pizza dough. When prepared in this manner, the pizza is baked in a pan rather than directly on the pizza stone or bricks in the oven.

Greek pizza is baked in a shallow pan, resulting in a crispy, thin crust rather than a dense, chewy one. Substantial quantities of olive oil are needed to avoid any sticking while cooking. The finished dish has a similar texture to focaccia.

Because of how the pan is preheated and oiled, the dough’s bottom may end up with more oil than the top.

In what ways does the Greek pizza differ from other kinds of pizza?

The predominant flavour of Greek-style pizza is a robust olive oil flavour. The dough and pan are both heavily covered with it before being baked, so the taste spreads evenly throughout the crust.

Put it on a napkin or paper towel if there’s too much oil for your tastes. By taking this measure, you’ll have less on your hands. If you find that the Greek pizza is too greasy, try eating it with a fork or sprinkling some grated parmesan on top.

When making pizza in Greece, most restaurants alter the sauce somewhat. When compared to traditional Italian pizza, this one is much lighter. Most recipes achieve this result by calling for either olive oil or water to thin the mixture.

Greek pizza sauce is at its best after being allowed to stew on the stove all day. Caramelization occurs around the sauce’s outer border at this point, resulting in a richer taste profile after the sauce is stirred to include the caramelised bits throughout.

Keep in mind that a pizza made in the Greek way but baked in an Italian pizzeria will taste quite different from a Greek pizza made in Greece. As used here, it means a typical pie topped with Greek-inspired elements like feta cheese or olives.

Why Greek Pizza Is So Popular

Greek pizza’s simplicity is one of its main selling points. The majority of the recipes you discover in this approach will call for whole, natural foods and little or no additional seasonings. You may have a cheese-only slice, one with pepperoni, or one with any veggies you choose.

This is also the method used by pizzerias. While they may all provide standard pies, the true fun begins when you get to pick and select which toppings go on your pizza as it bakes.

Greek-style pizza is well-liked in many parts of the globe for a number of other reasons as well.

Enjoying a Greek-style pizza means munching on a no-knead dough that, thanks to the addition of a little sugar, has a somewhat sweet flavour. The combination is allowed to “proof” (get its full flavour) overnight after it has been created. That makes the finished product more reliable since the slices’ firmness isn’t contingent on the pizza maker’s expertise.

Oregano, olives, feta, tomatoes, and maybe peppers are just few of the ingredients that should go into a genuine Greek-style pizza. It’s possible that some vinegar might be added as well. This concoction has a sour punch that may leave your tongue feeling prickly after eating it. Those who like this dish do so because it stimulates their senses in a holistic manner.

3. A MIXTURE OF CHEESES IS USED TO ENHANCE THE FLAVOR PROFILE.

White cheddar and mozzarella cheese are often combined in a 50/50 ratio to provide a bright and delicious topping characteristic on Greek pizza. This mixture can withstand the high temperatures of the pizza oven, which may reach up to 500 degrees Fahrenheit in a pizzeria. As it melts, it will move evenly over the pan, soaking up the olive oil flavour as it cooks.

In order to get that distinctive flavour, Greek pizzas have a generous helping of oregano added to the sauce. There are certain dishes that benefit from having extra fresh oregano, basil, and rosemary in the mix. In a variant of this meal, the crust is seasoned with dried Italian herbs and spices. The initial taste of this sort of pizza may be jarring if you’re not accustomed to strong flavours.

If you can’t find a restaurant that makes real Greek-style pizza near you, all you need is a cast-iron pan and some patience. Simple ingredients like bread flour, yeast, salt, water, and sugar are all you need to produce this quick and simple dough. Additionally, most ovens can reach the necessary baking temperature.

6. SOME PIZZERIAS USE BUTTER OR LARD TO CREATE A CRISPY CRUST.

In certain restaurants, olive oil has been replaced with butter or lard while cooking a Greek-style pizza for customers who prefer such fats to the traditional olive oil. The outside will maintain its signature crunch, but the inside will be airy, light, and chewy. By combining these components with classic Greek delicacies, you can ensure that every meal is filled with genuine Greek taste.

Whether you’re a veggie pizza fan, a meat pizza fanatic, or a cheese pizza purist, you’ll find that the dough and sauce’s taste profile complements your wine of choice. When going out with friends or a special someone, you may both feel good about eating something prepared with only natural, organic ingredients. A light ale would go well with this dish if you’re a beer drinker.

Greek-style pizza utilises tomato paste as the base sauce ingredient rather than fresh tomato juice. This refined item enhances the taste of each mouthful in a way that would be impossible without it. Include it in the dish, and you’ll get a healthy dose of iron, vitamin C, and vitamin K.

9. EVEN IF YOU PREFER WHITE SAUCE, YOU CAN MAKE IT.

A white sauce may still bring out the best in a Greek-style pizza slice whether you’re allergic to tomatoes or just like white sauce. Although the ingredients in this choice aren’t what you’d expect, it still has the same great taste that has people coming back for more. When you add a salad to your go-to dish, you have a full dinner that won’t break the bank.

10. IT PROVIDES A SIGNIFICANT SOURCE OF VITAMINS AND MINERALS.

The Mediterranean diet, of which a pizza made in the traditional Greek manner is a component, is often regarded as one of the healthiest ways of eating currently available to humans. The food’s high olive oil content is associated with improved weight reduction due to its potent anti-inflammatory effects. In addition to its high antioxidant content, oregano is a good source of vitamin B6, vitamin B12, calcium, phosphorus, selenium, and zinc.

11. PROVOLONE CHEESE MAY BE ADDED.

Adding some shredded provolone to your white cheddar and mozzarella sauce will take your Greek pizza to the next level. You might expect a little browning of the top as the rest of the ingredients simmer gently below. Since provolone cheese is somewhat resistant to burning during the baking process, certain pizzerias may offer it as a 100% cheese alternative.

WANT TO SEARCH FOR A NEARBY GREEK-INSPIRED PIZZERIA?

Greek-style pizza is one of those recipes that you either love or hate, depending on your taste. Even though there may be more spices on each slice, we’ve kept the toppings relatively light so that the pizza doesn’t weigh you down.

Since Greek pizza is unique in the way the dough is made and cooked, it’s up to you to decide what goes on top the next time you have a craving for a piece.

If this appeals to you, rather than ordering a pizza that is topped with exclusively Greek ingredients, seek out a pizza place that specializes in this kind of preparation. This dish might quickly become your new favorite.