Pizza in The Midwest, Ohio-Style: A Different Take on The Classic 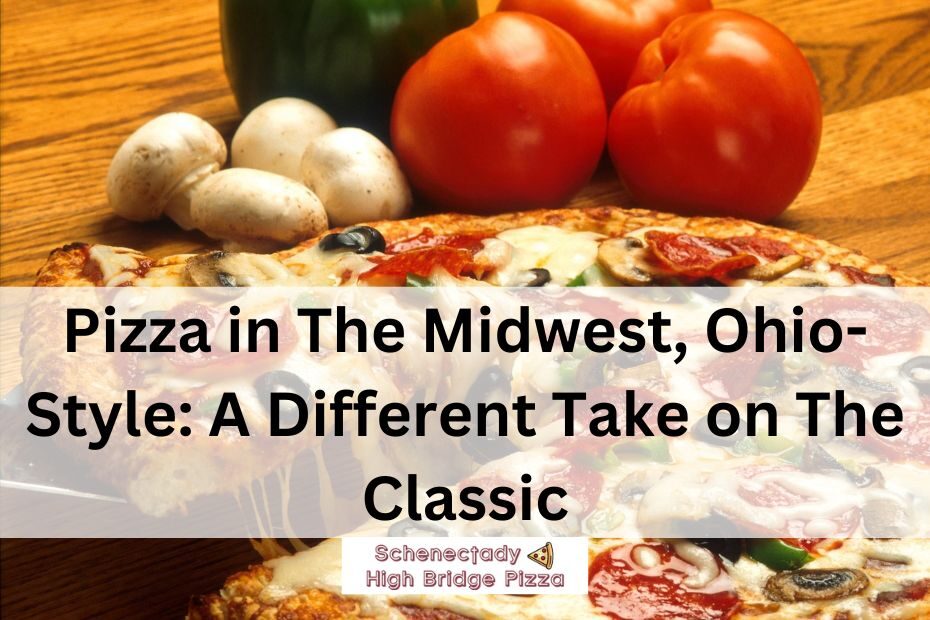 The people and ideas of many parts of the world come together in the United States. One of the main reasons Americans consider their nation to be the finest or strongest in the world is because of its demographic diversity.

As a byproduct of this way of life, many culinary traditions have emerged over the world. One food that has benefited from this social order in the United States is Ohio Valley pizza.

There are advocates and detractors of every regional style of pizza in the United States. Some would say that the method by which Ohio Valley pizza is prepared is the main reason why so many people find it unappealing. It’s an unconventional method for making pizza, but that doesn’t mean the taste isn’t appealing.

It’s possible to get this sort of pizza throughout the Midwest. You may also use the recipes provided by the excellent pizzerias in the Ohio Valley region.

Ohio Valley Pizza: What Exactly Is It?

Rarely seen on restaurant menus, pizza made in the manner popular in the Ohio River Valley. It’s a food that’s served cold, or at least chilled.

This method of pizza preparation is exclusive to a series of cities in the Ohio River Valley. Although this novel twist on a traditional meal originated in Steubenville, you may find it on the menus of at least a few other small towns as well.

Ohio Valley pizzas are baked pies with a thin coating of melted cheese, a thin layer of tomato sauce, and a baked dough. Then, a greater quantity of mozzarella is placed on top, creating a dish with contrasting hot and cold flavours.

In order to really appreciate the pizza’s taste, you should eat it all in one sitting. The cold cheese starts melting as soon as the meal is presented, so after a time it might turn into a congealed mess. That’s why most orders for this regional speciality are for single portions.

Slices delivered fresh from the kitchen will melt a little more quickly than those eaten just out of the oven.

RELATING TO PIZZA IN THE OHIO VALLEY AND ITS ORIGINAL STORY

Pizza first appeared in Steubenville in the early 20th century. The DiCarlo family was well-known for the quality of the bread they baked at their Italian grocery business. The family started playing to its strengths and finally turned baking into a full-time enterprise.

Primo, the eldest son, returned to the family in the 1940s after serving in the war. He returned home from his military service in Italy and spoke to his parents about the delicious pizzas he had eaten there. The addition of the crispy bread with cheese and sauce made sense for their bakery.

The DiCarlo family combined their bread recipe with the unconventional Ohio Valley-style pizza method to produce a meal that quickly became a local favourite. In 1945, a family launched a pizza in Steubenville as a full-time business; by 1949, they had expanded to create a second location in West Virginia.

It is unknown for sure why the DiCarlo family always added the toppings cold, although it is thought that the thicker baking pans of yesteryear necessitated a longer cooking time for the square crust. Putting cheese on the pizza before baking it would have resulted in a burnt crust.

That’s also why cheese is often placed beneath sauce on Chicago-style pizzas. It was an easy answer to a widespread issue of the day.

Just what is it that sets Ohio Valley pizza apart?

Ohio Valley-style pizza is distinct in both appearance and cooking method, earning it the nickname “poor man’s cheesecake.”

Typical pizzas are square in form. The crust is substantial, but not as huge as that achieved using a pan.

Two baking cycles are required for an Ohio Valley pizza. The crust is given a head start in the cooking process by being baked on a sheet pan with some homemade tomato sauce. After that, it’s taken out and given a final topping of sauce and cheese.

Provolone is a common pizza and restaurant cheese. The substitution of mozzarella is acceptable.

Once the pizza dough is browned to perfection, the final touches are applied. Instead of providing a complete pie, we cut each slice into four equal squares, so that everyone may have just the amount of pie they want and nothing more.

The recipe hasn’t been altered much since it was developed in the 1940s.

1. THE TOPPINGS GO ON AFTER THE PIZZA GETS COOKED.

Almost all of the toppings on an Ohio Valley pizza are added after the pie has baked. The unusual hot-cold bites you get from this method are the result of a mix of room temperature and cooled alternatives.

Pepperoni, sausage, olives, mushrooms, and any other toppings you can imagine are all good options for this pizza. Shredded provolone will also be included in your generous serving.

When ordering pizza for a large group, have it sliced in half so that everyone may get their favourite toppings. Nearly wherever you go, you may order individual components of a dish à la carte and put together your own special meal.

If you prefer more conventional fare, you may always choose a classic dish. A pizza made in the Ohio Valley is similar to the Roman pizza al taglio in terms of its preparation.

Tomato sauce is the key ingredient in making a delicious Ohio Valley pizza. It has San Marzano tomatoes as its base, yet whether or not Cento or other stewed choices are utilised is up for contention.

The mixture is then finished up with the addition of olive oil, oregano, chopped basil, and onion.

Chopped green peppers provide a touch of sweetness to the sauce. For more powerful tastes, some restaurants may add garlic powder, although fresh minced garlic cloves are preferable.

Some people may find the tartness of the stewed tomato sauce off-putting, in which case they may add up to two teaspoons of brown sugar each batch. The finishing touches to the taste profile are the addition of salt and pepper.

When all the ingredients are combined, it takes four hours of slow cooking to get the deep, rich flavours that are distinctive to Ohio Valley pizza.

Ohio Valley-style pizza is now widely available throughout the whole United States. Some eastern states are known for its popularity as a stadium food choice. DiCarlo’s has a considerable brand presence, with several offshoots serving delicious pizza made from the original recipe.

Why does practically everyone who lives in the Ohio Valley have a hankering for DiCarlo’s Pizza on a weekly basis? It’s got the signature tangy tomato sauce and it’s cheap. The crust is crackly and golden brown. Pepperoni and provolone cheese are always a safe bet, but you’re free to be creative with your pizza toppings.

DiCarlo’s has a twenty minute pizza turnaround time. Some individuals may travel hundreds of miles only to sample a pizza made in the Steubenville manner.

At the original location, you can get a medium for less than $10. We also have satellites in Pittsburgh and a few other nearby cities in the Valley.

However, you can get an infinite supply of squares for a decent price, even if the final crust isn’t quite as uniform as it is at the original location. Just tell the clerk what you want, and whether you want any specific toppings. The pie will next be put through its paces on the assembly line baking process.

The top crust is airy and flimsy, but it holds its own. Everything is served at room temperature rather than utilising cold components. Then it’s all shoved into a box and covered with provolone sprinkles and sent your way.

If you can’t get to an actual DiCarlo’s, this is the next best thing to the original pizza sauce from the Ohio Valley.

If you’re looking to satisfy a taste for Ohio Valley-style pizza while in the Wintersville region, Ray’s is your best bet. It’s a little pizzeria, and they only do takeaway, yet they still sell their pizzas in squares. Every day at 4 p.m., the first pies are put into the oven.

The crust is perfectly chewy and thick. The sauce has a tendency to be green pepper-heavy, but it still has that signature acidity for this kind of pizza. Your daily ingredient selections are listed on a handwritten menu.

Though it’s hit-or-miss at times, this little cafe has loyal customers who have been returning for over 20 years. There are a few sandwich options on the menu if pizza isn’t your thing.

Since its opening in 1983, this pizzeria has been serving authentic pizzas from the Ohio Valley. If you’re in the neighbourhood on Wednesdays, you should get some food to go or have it delivered since they have a great price. On Mondays, there’s free-for-all spaghetti, and on Fridays, there’s a fish fry to round off the week’s offerings.

If pizza isn’t sounding appealing, there is always the option of a full menu of authentic Italian dishes. There are also several speciality circular pies to choose from.

Iggy’s “Tray Pizza” is an example of an Ohio Valley pizza. Pepperoni, cheese, and pizza sauce are all included. In order to spice things up and try something different, you may substitute in foods like salami, broccoli, or bacon.

WANT TO TRY SOME PIZZA IN THE STYLE OF THE OHIO VALLEY?

Ohio Valley-style pizza should be at the top of your list if you’re want to taste one of the most distinctive regional pizza varieties in the United States.

The initial mouthful of the warm, acidic sauce with the chilly, freshly grated provolone might be a bit of a shock to the system. The crispiness of the crust is irresistible, and you’ll want to keep eating it until every last crumb is gone.

Others insist that the only proper way to eat a slice is with toppings added after baking, while other individuals just don’t like the notion.

Can you tell me how you feel about pizza that’s typical of the Ohio Valley? You’ll have to order a square to find out for sure.