SO, What Exactly is Detroit Pizza Like? (The Complete Manual) 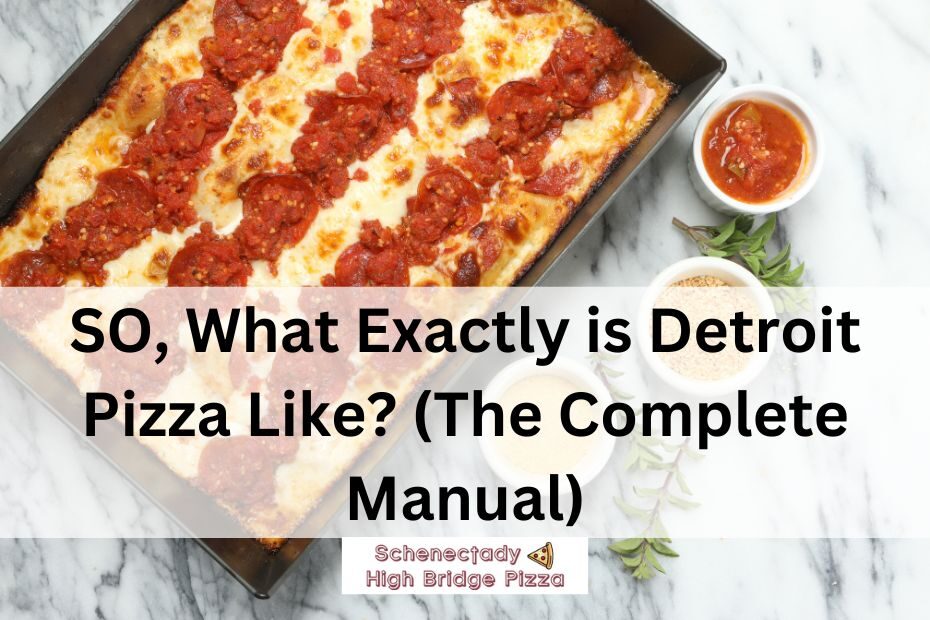 Sadly, New York City is often named as the city that presides supreme in the pizza world across the United States when asked this question.

It makes perfect sense, considering that New York City is the nation’s largest and that New York pizza, specifically the slice, is both delicious and easily adapted for the screen.

Imagine the Ninja Turtles balancing a deep-dish pizza on a skateboard, or Walter White trying to toss a different kind of pizza on his roof without getting covered in grease and marinara sauce.

Although it has achieved legendary status in the world of cuisine and popular culture, there is a more deserving contender in the Midwest: Detroit.

There is now substantial evidence that Detroit, once the centre of the automobile industry and the birthplace of Eminem, should be recognised as the undisputed pizza capital of the United States.

According to a Google News Lab study of regional food preferences, Detroiters eat at pizzerias more often than any other Americans.

The website SmartAsset.com, which specialises in financial data analysis and consultation on home rentals and insurance, recently named Detroit the best pizza city in the United States for 2017. This was based on a variety of factors, including the city’s incredibly high number of pizzerias per capita and its impressive average Yelp scores.

Why do people in Detroit go pizza-crazy? Perhaps it’s because they’ve developed a pizza that’s so simple to make and tastes so good that it defeats the purpose of eating pizza.

It’s clear that Detroit-style pizza is gaining popularity throughout the country and beyond, finally receiving the recognition it deserves.

Essentially every variety of square cut, thick crust pizza offered in the United States is a descendant of the Sicilian pizza, and Detroit-style pizza is no exception. This is a rectangular pan pizza with a fried bottom crust and blackened cheese that oozes from the edges. A Detroit-style pizza is easily recognisable by its highly crispy, cheese-covered crust, which, according to local Detroiters, is frequently best savoured near charred, and its sauce, which is layered above the cheese and ladled vertically across the pie in long, blotchy streaks.

Traditionally, pepperonis are used as a topping, and they differ from the large, flat circular ones typically seen on cheap pizzas in that they are smaller in diameter, noticeably thicker, and form into cups as they cook, thereby retaining all the delicious pools of grease that join the party during baking.

ORIGIN AND DEVELOPMENT OF DETROIT-STYLE PIZZA

It was in Palermo, Sicily, in the middle of the 19th century when the pizza that would become synonymous with Detroit was born. This historical dish, which was originally called sfincione, which reportedly translates to “thick sponge,” was not quite like a pizza as we know it today.

The crimson tomato sauce and rectangular form were evocative of focaccia, but the dish was conspicuously lacking in cheese. In the early 20th century, however, many Italians migrated to New York City, bringing with them their culinary traditions and transforming the sfincione into the Sicilian pizza we know today.

In 1946, at Buddy’s in Detroit, Michigan, the very first Detroit-style pizza was served, building on the success of New York’s Sicilian pizza but also introducing a whole new flavour profile.

As you’ll see in the instances that follow, pizza eventually made its way into the national consciousness and became an emergent culinary staple throughout all areas of the United States, becoming a cultural identity for Detroit and Michigan as a whole.

As was previously said, pies made in the Detroit manner are swiftly making their way throughout the Midwest, the East Coast, the Western Hemisphere, and even into cowboy country.

While it’s essential to pay tribute to the early fans of Detroit-style pizza and the local chefs who perfected the art of presenting this unforgettable treat, it’s just as crucial to explore the rest of the nation to get a feel for the scope of the Detroit-conquest style’s of the pizza world. This is by no means an exhaustive list, but it will try to focus on the key areas where Detroit-style pizza is seeing meteoric growth in popularity.

This is the original establishment, as was stated before. One of Detroit’s most beloved restaurants was formerly a dive tavern called “Buddy’s Rendezvous,” founded by Gus Guerra. Since it is generally accepted that most of the early advancements in pizza during the first half of the twentieth century were driven by enhancing beer sales, this sort of genesis is not rare for innovative pizza restaurants.

Thus, the first pizza made in the Detroit style was cooked on a blue steel pan that had previously served as a tray for organising miscellaneous car parts. Since then, purists have argued that you can’t make “real” Detroit-style pizza in anything except a blue steel pan, ideally salvaged from an old automobile assembly line.

Despite Loui’s Pizza’s reputation as a top pizza joint in general and a leader in the Detroit-style pizza subgenre, it will never overtake Buddy’s in popularity because of the latter’s place in pizza history. The creator of Loui’s, Louis Tourtrois Sr., was formerly Buddy’s pizza’s head chef, but he left to work for Shield’s, a rival pizza joint (which remains a notable Detroit pizza brand to this day). Later, in 1977, Louis would create the pizza joint that would provide the biggest threat to Buddy’s dominance in the Detroit region. They’ve been one of the top pizzerias in the country ever since they opened, and they’ve gotten a lot of press.

Now let’s talk about Emmy Squared, a hip East Coast business with its roots in the Brooklyn district of Williamsburg that serves pizza in the uncompromisingly wonderful Detroit manner. Because of their success, they were able to open a second restaurant in West Village, and even more remarkably, a third in Nashville, Tennessee.

They are experts at both the traditional methods of making a Detroit-style pizza (brick cheese placed edge to edge, sauce on top, etc.) and in coming up with novel combinations of ingredients to please the more experimental tastes of their customers.

For foodies, Austin has a wide variety to choose from, including sushi served at Michelin-starred restaurants, superb and award-worthy tacos, and possibly the finest BBQ on the globe. Yet, pizza in the city as a whole lacked a clear character and a long-term subculture.

In 2011, a food truck called Via 313 opened up shop on Rainey St, providing real Detroit-style pizza with a variety of interesting toppings. Its “Cadillac” pizza strikes a novel and ingenious balance of sweet, acidic, and salty flavours thanks to the addition of bleu cheese, prosciutto, and a sour balsamic glaze.

Since then, they’ve added two more food trucks and three more permanent sites in Austin, and they’re showing no signs of slowing down.

It may come as a surprise that Detroit-style pizza has found a place in the San Francisco culinary scene, given the city’s reputation for being too health-conscious and bohemian. The creators, Marc Schechter and Danny Stoller, have been instrumental in spreading Detroit-style pizza across the bay area.

While both had worked in the pizza business before, and both had expertise making Neapolitan pizza (the standard fare in the Bay Area), they saw the rising tide of popularity of Detroit-style pizza and its innovation.

Similar to Via 313’s humble beginnings in the food truck space, Square Pie Guys operates through a Pop-Up stand, which goes to show how effective it is to economically serve Detroit-style pizza without needing the space and infrastructure to make more traditional round pies. Pizza Squared, also in San Francisco, and Leaning Tower, in Oakland, are two more local establishments that do credit to the Detroit style.

Exactly what is it about Detroit pizza that makes it so popular?

Detroit-style pies aren’t just taking over because they’re delicious. I mean, it’s probably 95% of the reason why they’re taking over but anyone can name a food they love with all their heart that doesn’t get enough appreciation in the industry.

In today’s Social Media emphasized restaurant landscape, consumers demand more than quality home cooked food, they expect to be wowed by all senses. They also want something new, which Detroit style pizza technically isn’t given that it’s been served for over 60 years, but it is becoming a first time experience for many across the United States.

Here are a few of the things these new Detroit-style test pilots are loving about the iconic pie.

It’s a tangy white American cheddar cheese that has a comparatively higher fat content than other white cheddars and is also significantly softer, and thus meltier. High fat content cheese is critical in a Detroit-style pizza in order to create perfectly crisp edges. Low moisture mozzarella may be the emperor who reigns over all other cheeses in the kingdom of pizza, but it is far too lean and mellow to rule over a Detroit-style pizza.

The sauce is also as crucial and underappreciated as it is in every pizza. Given that the sauce is on top, it has to accomplish tasting great and looking great. The sauce also can’t be too loose or also it wouldn’t be able to rest on top and would look like a soupy mess. The sauce will tend to skew closer to a sweeter flavor profile so as to contrast with the acidity of the Wisconsin brick cheese.

For many, texture is the most important component when it comes to determining truly worthwhile pizza. The crust in a Detroit-style pizza is a delicate balancing act between fluffiness and crispiness, with well-made crust evoking notes of frybread. What surprises a lot of people when they bite into a Detroit-style pizza crust for the first time is its lightness, as its outward appearance would suggest that it’s the type of pizza you’d need to order a to-go box for, yet it is in actuality an enormously accessible (and binge-able) pie.

There are a lot of features that make it stand out – the leopard print layer of melted white cheddar cheese and the golden-brown bubbles on the surface, the streaks of thick marinara over top, and the crackling near black edges of cheese along the edges. It’s a veritable smorgasbord of contrasting textures and colors that can lean towards either a rustic or gourmet aesthetic depending on how bold you are with your toppings.

Whatever you decide, there is no Detroit-style pizza in existence that isn’t Instagram-able.

Detroit has existed as the underappreciated wellspring of influential pizza making for far too long. Detroit gave us Domino’s, one of today’s titans in the chain pizza market, as well as Little Caesar’s, which while nowhere close to as large as Domino’s, is an incredibly large and influential competitor and they serve what remains as the only reliable fast food approximation of Detroit-style pizza on the market.

It’s high time that Detroit enters into the national conversation as the definitive pizza city in America.

Yet, trends in food culture have historically been temperamental (anyone remember Jello Salads?). It is entirely possible that this wave of popularity and success will diminish over time. But if there is, there are few if any signs that show that it will.

Since Shawn Randazzo served up Detroit-style pizza to take home the prize of Pizza Maker of the Year at Las Vegas’ International Pizza Expo in 2012, this pizza has been consistently a commercial and critical behemoth throughout the nation.

Even outside of it, there’s a prominent Detroit-style pizza brick in mortar location in Toronto, Canada of all places! There are some who follow trends, and some who lead them, and it’s looking like Detroit-style pizza is at the front of the pack in today’s pizza Iditarod.