Understanding the Many Varieties of Pizza Crust 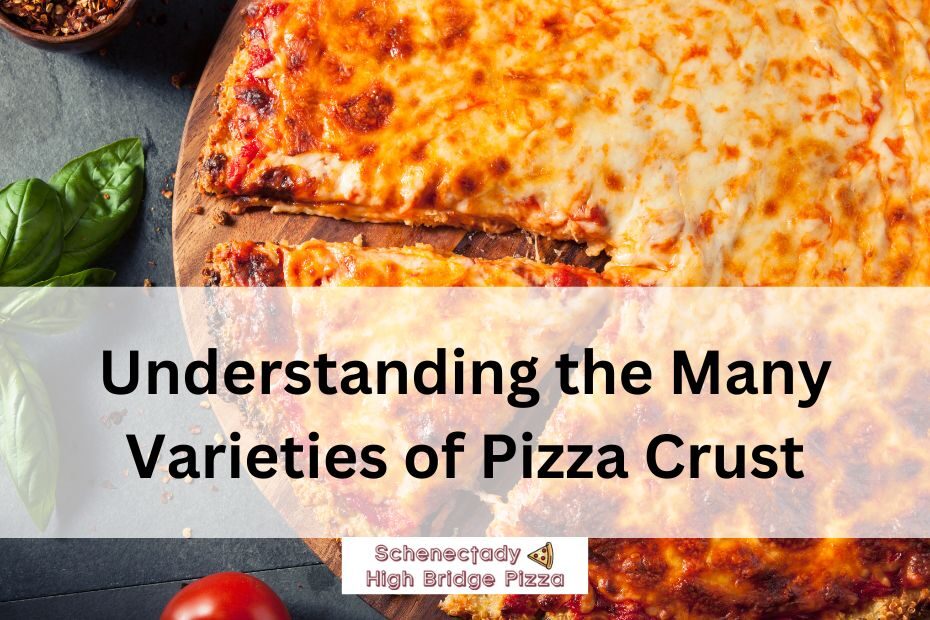 Pizza is a global phenomenon, ranked in the top 10 most consumed foods. In fact, this is so obviously true to the vast majority of people that providing empirical evidence for it seems superfluous. To illustrate (not criticise) just how voracious pizza eaters are, consider that in 2018, global market sales reached almost $135 billion dollars, which is more than the reported GDP of Hungary, and that the United States captures the plurality of pizza sales across all countries, with over $45 billion in sales last year alone.z

The most important part of a pizza is the crust, despite the fact that most pizza commercials highlight the exotic toppings or the famous cheese-pulls that slide down a heated slice. It’s not just this guy’s perspective, though; over 60% of people say the crust is the best component of a pizza. When selecting between a New Haven pizza, a New York slice, a Detroit pizza, or a Sicilian pizza, the crust is usually always the decisive element.

ASK YOURSELF THIS: WHY IS THE CRUST SO IMPORTANT?

There’s a simple explanation for this: a perfect pizza’s crust is the bedrock upon which everything else rests. The resulting pile of cheese, sauce, and toppings would taste more like lasagna than pizza if the crust were removed. Of course this is an exaggeration, as cheese and toppings may stand on their own as tasty treats, but the idea remains that a crust is what really makes a pizza, and what gives its toppings their functions. Like a vehicle without wheels, or more accurately, a drink of water without a container, a pizza without a crust is useless.

WHAT FACTORS INTO MAKING THE BEST PIZZA CRUST?

Pizza crust perfection is subjective; different people will have different standards. It’s more informative to get into the specifics of the materials, dough making, and baking processes that make up the pizza chef’s preferred style. The following are some of the most sought-after characteristics in pizza crusts:

Crust’s taste may vary greatly depending on the components used to make the dough and the kind of oven used to bake it. For instance, unlike many other pizza varieties, New York pizza dough often includes sugar, leading to a sweeter crust and the extra effect of caramelization over the bottom. Different tastes are imparted to a crust depending on whether it is baked in a woodfire oven, a regular oven, or a coal-fired oven.

For the most part, this is what differentiates pizza newbies from pizza connoisseurs. Various types range from being very crunchy (some even crackerlike) to being soft and floppy. Crusts like the Chicago deep-dish style and the flakier Neapolitan form are best suited for a knife and fork when devoured (among the first styles of crust made for pizza).

This may refer to a variety of factors, including the crust’s texture, but it’s best described as the crust’s strength and pliability when loaded with toppings. A thicker crust, such as the Sicilian, Detroit, or Focaccia type, could appear to be the most appropriate choice here. It’s not always the case, however. Chicago deep-dish pizza, which is famous for its excessive amounts of cheese and toppings, actually has a thinner crust than those other kinds. When properly baked, even a thin crust can hold a surprising amount of cheese and toppings.

Now we can get to the juicy part of the story. It would take us all day to systematically investigate the many crust varieties, as well as the geographical differences throughout the United States. Instead, we’ll focus on sampling a few crusts and pizza preparation methods that represent the range of flavour, texture, and pizza integrity you may anticipate to encounter. These are not arranged by quality but rather (mainly) by crust thickness, with each tier clearly labelled.

When most people think of thin crust pizza, they think about how likely it is to fall flat on its face (i.e. the tendency for a crust to flop and then retain its shape). Most people believe that thin crust pizza was the original kind of pizza to make it famous across the world. Everyone may find something to their liking in the wide variety of toppings and sauces found on thin crust pizza.

This is definitely one of the most one-of-a-kind items here. Apizza, as New Haven pizza is affectionately nicknamed by its citizens, is a far cry from the soggy pies you would expect to find in other East Coast cities. First of all, since the incredibly thin dough is carefully stretched out before being baked in a blazing hot coal-fired oven, its form is often uneven, being neither a perfect sphere nor a perfect rectangle. A lightning rapid cook time at high temperature guarantees a lovely char without drying out the dough too much, making this crust likely the thinnest on our list and rather crispy.

The St. Louis style pizza has a lot going for it. The provel mix, a special combination of white cheddar, swiss, and provolone, is a popular item on the menu and a point of conversation. Another feature that will stand out is the unleavened crust (i.e. devoid of yeast). This results in a crust that is highly crispy and not malleable; in fact, some people compare it to the texture of a cracker. As a result, “tavern style” is a common way to slice a St. Louis-style pizza (i.e. into rectangles).

This pizza style probably contributed to the worldwide spread of pizza around the turn of the twentieth century. After the unification of Italy in 1889, King Unberto I and Queen Margherita visited Naples and enjoyed this dish. Pizzas made in this fashion eventually became known as “pizza margherita” in honour of the monarch. The dark bubbles and splotchy distribution over the crust’s upper and lower surfaces are hallmarks of this particular kind.

In the eyes of many, this is the pinnacle of pizza making techniques. It’s the pizza type most often seen in media and the one most commonly offered by pizza chains. New York-style pizza slices are famous for their enormous size and delicious flop factor, which allows for the signature pizza fold. New York-style pizza is distinguished from Neapolitan pizza by its thicker crust and longer baking time—15 to 20 minutes, on average.

A thick crust is often rectangular (though not necessarily) and is distinguished by its ability to support enormous quantities of tasty toppings. Each of the following crusts deserves a “A+” in terms of pizza integrity, but that doesn’t mean you should overlook their fantastic tastes and sensations. The increased popularity of thick crust pizza throughout the United States may be attributed to its many distinct varieties, including the buttery crust of Chicago deep-dish pizza and the crispy-on-the-outside, fluffy-on-the-inside dough of Detroit and Sicilian types.

If you’re acquainted with “deep-dish” or “pan pizza,” you’re probably already familiar with this style. The crust for a Sicilian pizza is produced in a stand mixer at home and in many restaurants due to its ease of preparation. The high oil and water content of the dough may seem strange when put together, but when joined with wheat and yeast, it produces a delicious, airy crust. The dough is cooked on a deep baking pan that has been well greased with olive oil.

For many, a Chicago deep-dish pizza is most easily identifiable by the mounds of mozzarella cheese and the unconventionally thick tomato sauce atop the pie. The crust, however, is as distinctive as the filling and is just as important (if not more) to achieving the signature flavours of a Chicago pie.

Since a deep-dish pizza may be in the oven for 45 minutes or more, its crust requires some help while it’s baking. After the dough has been rolled out and distributed into the prepared cast-iron skillet, further layers of topping, followed by cheese, and finally a protective coating of tomato sauce, are added. The crust doesn’t burn throughout the lengthy baking process because it absorbs the rendered lipids from the toppings and cheese atop it.

Bistros, cafés, and restaurants that specialise in light fare often have flatbread and focaccia bread pizzas on their menus. Many people wrongly assume that this pizza style represents a “new wave” or “trend” in the pizza industry. Some historical documents suggest that ancient Egyptians, Greeks, and Romans all ate pizza in a flatbread form. I mean, come on!

The food industry is catching on to the growing awareness of gluten intolerance and Celiac disease among the general public. Regular pizza dough elements like water and yeast are used in gluten-free pizza doughs, but gluten-free flour is used as the binding agent. Many different types of flour are available to those who need to avoid gluten since they are not made from wheat or barley. The flours used to make gluten-free pizza dough may be derived from a wide variety of sources, including soy, rice, garbanzo beans, tapioca, and any number of their various combinations. For obvious reasons, gluten-free crusts are best suited for thin-crust pizzas due to their thicker and less flexible texture in comparison to wheat flour crusts.

When compared to gluten-free pizza crust, a crust that is suitable for vegans may be made using the same components as regular pizza dough. For instance, the absence of any traces of animal ingredients in a Neapolitan pizza dough makes it automatically vegan. Due to cheese’s dairy nature, however, the crust is often expected to do more work than normal in terms of flavouring the pie.

When you get to the very end of your pizza and are confronted with the crusty edge, you have to make a choice. While the vast majority will devour every last bit of their pizza, there are many who regard the underwhelming crust at the slice’s tail end to be a waste. No, you’re wrong! The crust of most pizzas is the result of a lot of labour and skill, and you can put it to good use in a number of different ways.

The crust is often used as dippers. This is a great option if you’ve also requested marinara sauce on the side, but olive oil, salt, and pepper would do in a pinch. Melted butter is very tasty if you aren’t worried about your diet.

Cleverly, you can utilise stale crust that you’ve chopped into pieces for salad croutons. If you want to be really resourceful, you can freeze the segments and use them as a reheated soup garnish or to make artisanal bread crumbs in the food processor. To whatever extent your creativity allows, your crust may be used for whatever you choose!

Every pizza style has its origins in the crust, thus determining its basic components is the first order of business. It’s the key ingredient that gives pizza its distinctive flavour and texture, but it’s frequently overlooked since it’s covered up by more alluring cheese and toppings. But the crust’s holy job is to hold up the fillings and show them off to their best advantage.

However, the crust of a Neapolitan-style pizza—baked to perfection with few toppings—is the star of the show. The crust of a New Haven style pizza is similarly spare, with some versions even omitting cheese completely. It would be a mistake to overlook the crust, the real show stopper in pizza. This is especially true of the Sicilian and Detroit styles.