What Exactly is Brooklyn-Style Pizza? 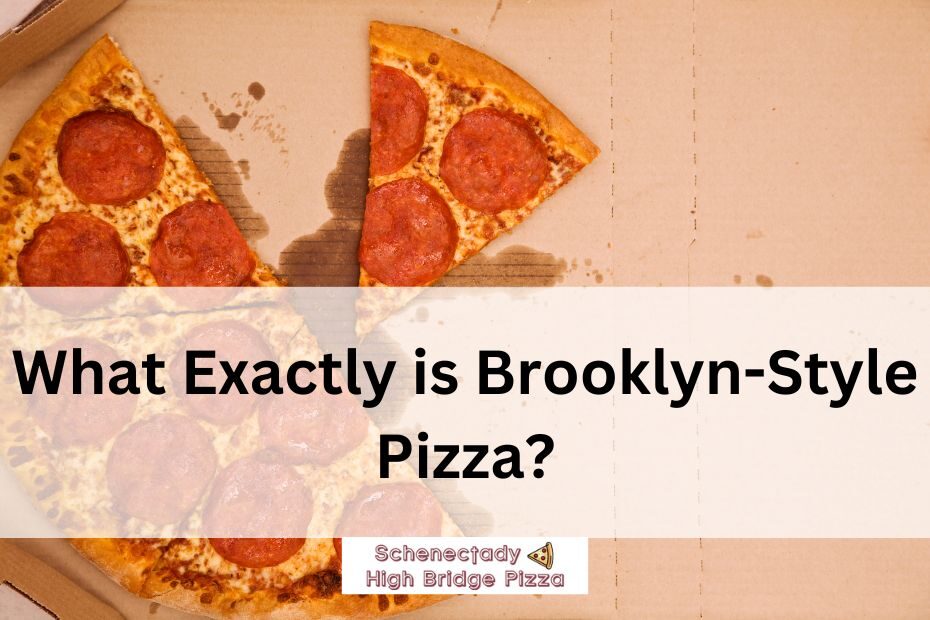 There is a long-standing custom of giving pizzas the names of the cities where they were first created. New York style pizza, Chicago deep dish pizza, Detroit pizza, St. Louis pizza, Neapolitan pizza, and so many more all have their own unique flavours and are often referred to by where they were born. Just what, exactly, is a Brooklyn pizza? If you had to choose between New York and Brooklyn pizza, which would you choose? Okay, let’s find out right now.

A LOOK BACK AT THE EVOLUTION OF NEW YORK STYLE PIZZA

Let’s review what we already know about New York pizza before we go on to Brooklyn pizza. The most frequently accepted story is that a pizza chef from Naples, Italy, immigrated to the United States in 1897. (thank you, Italians). These early American pizzerias baked their pizzas in coal-fired ovens, and their dough was prepared from regular white bread (so, no GF vibes here). Many of us die-hard New York pizza fans attribute the special flavour to the water used to make the dough, which is why the city’s moniker is so significant.

How to Make a Real Brooklyn Pizza

It’s easy to see why New Yorkers might mistake a slice of Brooklyn-style pizza for a slice of New York-style pizza; both have a thin, crispy crust. Domino’s first started calling their pizza “Brooklyn-style pizza” in 2006 to set itself apart from the more conventional hand-tossed pizza. One of the defining characteristics of a Brooklyn-style pizza is the use of cornmeal into the cooking process, which results in a crispier crust. In addition, instead of the usual eight pieces per pie seen in a New York style, there are just six. This produces gigantic, over-sized pieces that may be folded and enjoyed.

Even though Domino’s Brooklyn pizza is sometimes credited with popularising the term “Brooklyn-style pizza,” the dish has been served by popular Brooklyn eateries since at least 1924. Totonno’s in Coney Island, as well as Di Fara’s and Grimaldi’s, are just a few of the well-known pizza joints in Brooklyn.

Similarly to New York City pizza, Brooklyn pizza is typically available in the same size ranges, between 18 and 45 inches, and features a wide variety of toppings, from the standard cheese to veggie options like mushrooms, onions, green peppers, and black olives, and even meat selections like pepperoni and sausage. Both of these choices are available at pizzerias in New York City. All pizzas are made with fresh ingredients and are hand-tossed with tomato sauce and mozzarella. The amount of cheese utilised and the crispiness of the crust and pizza dough are the main distinguishing features.

Read on to learn the fundamentals of creating a traditional Brooklyn pie.

First, dough balls are stretched into the familiar hand-tossed discs that define Brooklyn-style pizza. Large pizzas are made from medium-sized dough balls, and extra-big pizzas from large ones. Brooklyn pizza is characterised by a thinner crust, so it’s crucial to get the dough just right from the start.

After being tossed and baked, the dough becomes thin and crisp, and the cornmeal coating on the bottom contributes to its distinctive crunch. Because of this, the pizza has the texture and flavour of a thin crust.

Brooklyn pizzas often have a free-for-all approach to toppings. If you want a pizza with a unique twist on traditional ingredients like pepperoni, onions, mushrooms, green peppers, black olives, garlic, sausage, mozzarella, provolone, parmesan, meatballs, and basil, it’s probably possible to make your own from scratch. However, don’t expect to find unique fare, such as goat cheese and kale pies, at most Brooklyn establishments. A ham and pineapple pizza is also a rarity among local pizzerias. We recommend you sample pepperoni pizza, the most popular kind in New York.

The Proper Way to Enjoy a Slice of Authentic Brooklyn Pizza

It seems strange to provide instructions on how to eat pizza, but there is a certain method to do it if you want to do it the Brooklyn way. Take a huge bite out of your pizza by folding it into a size that will fit in your mouth. It is difficult to eat just a little portion of one of these slices, and you certainly can’t use a fork and knife.

BROOKLYN PIZZA: HOW TO SERVE IT

Because it is so thin and crispy, Domino’s and other pizza joints choose to sell their Brooklyn-style pizza in squares rather than triangles. However, you can buy the classic triangular slices at practically every Brooklyn pizzeria; they are often enormous and can be folded in half for easy eating.

Thanks to the promotion of Brooklyn pizza by chain restaurants, thin-crust pizza is now a household name in the United States. Order in some Brooklyn-style pizza for your next family meal or social gathering to satisfy everyone’s need for a thin, crispy crust that’s perfect for splitting. We believe a cheese pizza with this crust would be just up your alley. Domino’s pizza in the Brooklyn style (as opposed to their hand tossed pizza, which has a thick crust) is a fantastic alternative for getting Brooklyn pizza anyplace. Exceptional examples of American pizza.